This article in Online Manorama English touches upon the highlights of the life and career of Prof. Panmana. 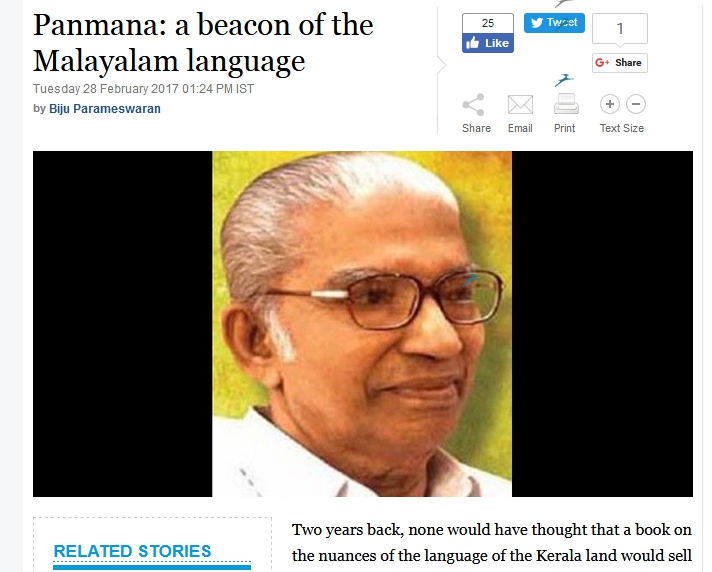 Panmana: a beacon of the Malayalam language

Two years back, none would have thought that a book on the nuances of the language of the Kerala land would sell like hot cakes, giving best selling works of fiction a run for their money. Well, not any more: such is the popular appeal of Prof. Panmana Ramachandran Nair’s Nalla Bhasha omnibus, which is now running into multiple reprints.

The venerable professor has been rendering yeoman service to Malayalam language for over more than a half century now. He observes the world from the quietude of his Thiruvananthapuram abode, his passion for clean writing and literature of the highest class still unsullied. He continues to enrich our culture through his contributions to it, age or ailments deterring neither his spirit of inquiry nor thirst for knowledge. He is an academician, grammarian, critic, translator, scholar and editor par excellence.

Panmana was born on 13th August, 1931 in Panmana village of Karunagappally Taluk of Kollam district in Kerala as the only child of Kannakath Kunju Nair and Kaleelil Lakshmikkutty Amma. The great siddha Vidhyadhiraja Chattampi Swamikal dotted on the child Kunju Nair with his talent for singing and affectionately called him Bhagawathar. Panmana had his early schooling in the Sanskrit school near Panmana Ashram. After passing ESLC from Karunagappally High School, he studied in the Intermediate College and graduated in Physics from SN College, Kollam.

He enrolled for MA Malayalam at University College in Thiruvananthapuram where the department Head Prof. Konniyoor Meenakshi Amma granted him a seat after he cleared a special test as his degree subject was science. As a college student, he edited manuscript magazines and wrote poetry in Sanskrit and Malayalam. After securing a first class first rank and the Dr. Godavarma prize for the achievement, he worked for two years in the University Lexicon edited by Sooranat Kunjan Pillai. In 1960, he joined Palakkad Victoria College as lecturer. The department Head was Prof. S. Guptan Nair.

Panmana became a member of the governing committee of Granthasala Sangham in 1958 and in two years, rose to Deputy Editor of its publication Granthalokam. It was at his persuasion that the legendary P. Kesavadev penned the short story ‘Vayanasala Vasoolla’ for the magazine.

Panmana taught at seven colleges during his 28-year-long career before retiring as Head of the Dept of Malayalam at University College in 1987. He also served in the Kerala University Senate and put forth five recommendations for the foolproof conduct of examinations and results declaration by the University. For the University’s Golden Jubilee in 1987, as a member of the Publications Committee, he entrusted eminent historian Prof A. Sreedhara Menon with the task of preparing a comprehensive two-volume history of the University.

Panmana had served in the committees of Kerala Sahitya Akademi, Kerala Kalamandalam and Sahitya Pravarthaka Sahakarana Sangham. He was a founding member of the P.K. Parameswaran Nair Memorial Trust, set up in 1991 in remembrance of the great historian and critic. Today, Panmana serves as the editor of the trust, which has published 29 books of literary studies and bestowed awards for the best Malayalam biographies in the quarter century since its formation. The latest of these books features studies on Thakazhi. As a patron of Kathakali, he is naturally the guiding light of Drisyavedi, which was started in 1972 to promote classical arts.

Panmana has written 20 books, including five on the correct usage of Malayalam language and five for children. His language books ‘Thetum Seriyum’, ‘Thetilaatha Malayalam’, ‘Suddha Malayalam’, ‘Thetillatha Uchcharanam’ and ‘Bhasha Suddhi Samsaya Pariharangal’, which are the products of his interaction with students and his keen observation of the use and abuse of language in daily life, were brought out in an omnibus called ‘Nalla Bhasha’ during his Shathabhishekam two years ago. His children’s works such as ‘Oonjal’, ‘Mazhavillu’, ‘Poonthen’, ‘Deepasikha Kalidasan’ and ‘Appooppanum Kuttikalum’ have been similarly collected as ‘Panmanayude Balasahitya Krithikal’.

He addressed nearly 3,000 queries on the language through a column that ran in Career magazine from 1986-96, resulting in the book ‘Malayalavum Malayalikalum’. His life study of Kerala Panini called ‘Navayugasilpi A.R. Rajaraja Varma’ is a seminal work. It is divine ordainment that he chaired the Malayalam Dept at University College like the subject of his biography did much earlier.

His prose interpretation of Unnayi Warrier’s 16th century play ‘Nalacharitham Attakkatha’ attempts to set aright the lacunae of past studies on the classic, which disregards the fact that ‘Nalacharitham’ is a visual experience, according to Prof. S.Guptan Nair. The masterly ‘Kairaleevyakhyanam’ underlines the point that attakkatha is an amazing blend of literature, music and histrionics. Panmana’s lucid prose translation of Melputhoor’s devotional work ‘Narayaneeyam’ simplifies complex Vedanta philosophies for the reader. Prof. G. Balakrishnan Nair describes it as a fragrant and soothing sandal paste on the forehead of Kairali.

The work fetched him the Kendra Sahitya Akademi Award for translation to Malayalam that year. Panmana’s book on Neoclassicism is the first of its kind in the language as the former Kerala University VC and academic Dr. G. Balamohanan Thampi states in its foreword. The prose translations of ‘Ascharyachoodamani’ and ‘Swapnavasavadattam’ from Sanskrit too won critical acclaim. Despite having written several articles over the years, ‘Parichayam’ is his only compilation of articles. It contains seven literary essays, which. according to Dr. T. Bhaskaran, are keen observations, whereby the author lays out facts with the calm self-restraint of a meticulous researcher.

Panmana wrote articles on Malayalam language in all major vernacular dailies and gave talks on radio and TV. He submitted a detailed blueprint for the Malayalam University and took the initiative in establishing the Kumaran Asan memorial at Thonakkal. His 2010 autobiography ‘Smrithirekhakal’ is dedicated to the memory of his mother Lakshmikutty Amma and grandmother Narayani Amma, two souls who molded his character through recounting stories from mythology. In the book. Panmana fondly recalls the long association with his gurus like Prof S. Guptan Nair, Prof G. Balakrishnan Nair and N. Krishna Pillai. Other luminaries he had worked with include G. Vivekanandan and Elankulam Kunjan Pillai.

An 84th birthday volume on Panmana was brought out in 2015 titled ‘Kairaliyude Kavalal’. It featured articles by critics, including his prominent shishyas alongside forewords of his major works and an interview. A decade back, the Kerala Sahitya Akademi bestowed on him a Lifetime Achievement Award for contributions to the language and literature.

One reason for the surge in popularity of Panmana’s books is that Malayalam is now an optional subject for Civil Services examination and the number of aspirants is on the rise. Malayalam was granted classical language status in 2013. The state government, autonomous institutions and corporations have been directed to make Malayalam their official medium of communication. Ironically, today our language is mauled and mutilated in the media and even classrooms like never before.

Malayalis need to inculcate the practice of its correct usage. Keeping this in mind, Panmana continues to guide us in the appreciation of good language and writing. His real-life examples, laced with subtle humor, endears itself to the reader without ever assuming a tone of condescension.